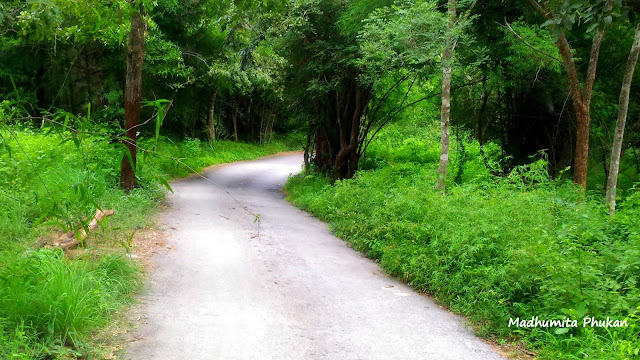 1979 Summer noon. On the bank of Great Brahmaputra, in a never-ending sandbar! A sixteen year boy was weeping among dead snakes....He was running here and there to find out if any of the reptiles was alive....

A colossal flood washed a large number of the limbless beasts ashore on the sandbar, that year too, as every year. Once the water receded, the teenager found himself distressed to see the lifeless form of the snakes due to the sand heat. The sun-baked sand bar was spread over many hectares,  without any tree cover. He soon approached the forest department and requested them if they could try to grow trees in this sterile band. But, the response was not in his favour. They said nothing would grow in that sandbar, but suggested him to try growing bamboo by himself.

There was nobody to help him. Nobody was interested to support him.  But, he was determined to do something, to refuge the wildlife. He began his journey with 25-30 bamboo saplings and started springing seeds of different tree -breeds in the barren land with utmost love and care. He decided to dedicate his life to join the green revolution. He himself moved to the site, constructing a bamboo hut, so that he could give his full time in creating a lush new forest ecosystem.

Soon, the jovial bamboo crop became a tall hedge. And with rolling of time, the barren wasteland turned into a lush green oasis. The forest today hosts a sprawling 1,360 acres of jungle, serves as a safe heaven for numerous birds, and animals. It now houses Bengal tigers, Indian rhinoceros, and over 100 deer and rabbits. Molai forest is also home to apes and several varieties of birds, including a large number of vultures. There are several thousand trees, including hilikha, omora, arjun, ejar, golmohar, koroi, moj and himolu. Bamboo hedge covers an area of over 300 hectares. A herd of around 100 elephants regularly visits the forest every year and generally stay for around six months. They have given birth to 10 calves in the forest in recent years. 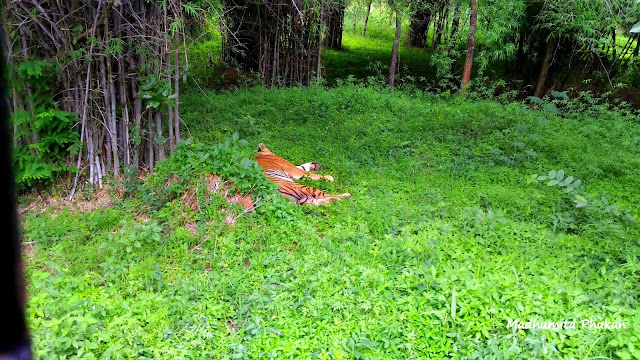 So, who is this Man?

He is not Mougli of Jungle Book, neither a saint, but he is a man with heart, full of love for nature.
Yes!  It's the story of the Green Warrior - Jadav Payeng, popularly known as Molai. The creator of Molai forest (Molai Kathoni)! The Forest Man of India! A man who determinedly and single-handedly turned the fallow land into a lush green forest!

The Molai forest is situated on the banks of the Brahmaputra, an area prone to soil erosion and floods that wreck havoc in Assam every year. It is only accessible by boat and hike. One has to cross two small streams by boat to reach Aruna Chapori. A tractor ride there onward takes one to the edge of Molai Kathoni. Payeng lives in Aruna Chapori (located near Kokilamukh in Jorhat district of Assam).

Payeng lives with his family at the edge of the forest. His source of income is selling milk from the cattle to villagers. He lost over 100 cows to tigers from the same forest he created, but this never deterred him from planting more trees. He himself has constructed his house for the fifth time now because elephants have destroyed it from time to time.

It's nothing as such that he easily made this happen. His marathon efforts for more than 30 years, pure selfless intention and a keen understanding of ecological balance made his dream come true. One of the biggest threats to the trees was men, who tried to destroy trees and sell the wood for their economic gain.

Watering the growing area of plants poised to be an immense problem. Drawing water from the river and watering all the growing plants was not quite easy task, as the area proved to be vast for one man. He built a bamboo platform on the top of each sapling and placed earthen pots with small holes in them. The water used to gradually drip on the plants below and water them through the week until the pots were drained of water. Payeng also made a 50 meter wide and 2.13 meter deep canal to feed water to the animals.

From the last three decades, he has been planting one sapling every day and using indigenous method to convert the dry land to a dense forest. Payeng also liberate the red ants, termites and earthworms into the soil to change the nature of the soil, to increase its fertility and make it favorable for planting other trees too. He brought these worms and insects from his village.

He quietly continued planting trees for 30 years until he was discovered by nature photographer Jitu Kalita in 2009. Jitu wrote an article about the forest in a local Jorhat newspaper, which was the "turning point" in Payeng's life. In 2015, he was honoured with Padma Shri, the fourth highest civilian award in India. 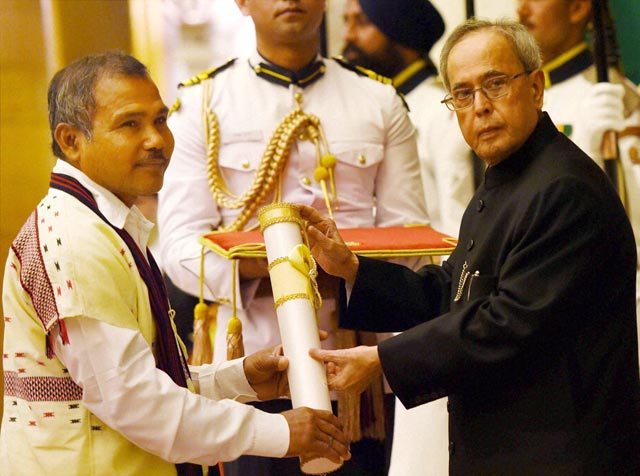 Payeng now plans to plant coconut trees to combat erosion in the bank of the river. As coconut trees are always straight, they help prevent erosion if planted densely. Payeng says that planting coconut trees will prevent erosion and boost Indian economy too and will also help in fighting the climate change. He has suggested many ideas to save erosion, though till now no one has adopted them.

If one boy can plant an entire forest on a barren sandbar of a river, then imagine how much we can achieve working together with that same spirit and zeal. If every Indian plants just one tree, isn't then the problem of de-forestation would soon be at an end?

Posted by Madhumita Phukan at 4:05 AM