Keep the Reminder Active, on Phone, or Mind!

He took an off that day….Since morning, he was restless.

I ignored. I had no time for him those days…as I was quite busy with my one year child.

“Let’s go out for lunch, Pokhila will take care of our son.”

“No, no….let’s have our lunch at home only, I don’t prefer outside food so much…” I made an excuse as I wanted to spend most of the time with my son.

“Let’s cook some special chicken, I want to eat something luscious…yum, yum…” His lips and expression were talking his mind.

“We can make some chicken special dish in our dinner…” I was not ready to get engaged in the kitchen with him during the day time.

We did an evening walk in our colony. There was a bakery, the aroma of the biscuits and pastries touched our nostrils while we were passing by.

“I want to have icing cake today…” He suddenly said.

And, we reached home.

In few mins, he quickly took bath, did prayers, then started playing with son normally. He had been receiving quite a few calls since morning, what I marked. I wondered if everything was alright.

In the evening, I opened my laptop and started watching one movie. He and son were playing beside me on the bed. Suddenly, the calling bell rang. I wondered who would come this time…He went and opened the door, I could hear some people singing…. “Happy Birthday Rupak da!”, “Many many Happy returns of the day, Rupak da!”…and the celebration started.

I recollected what was that day!!!! Why he was restless for!!!

I got embarrassed, tried to cover up….but was of no use….

This time, I wished on time, infact before time, I set the reminder on the mobile phone, as a back-up though!

Posted by Madhumita Phukan at 6:51 AM 10 comments:

‘Nature at it’s best’ time. Green, fresh leaves, colourful flowers bloom everywhere! The allure of rolling hills covered in mist, verdant forests where green stretches to the horizon, all start calling stalwartly to pamper, this season. And yes, your mind and soul too seek some relaxation after the year-end.

So, we few friends decided to treat ourselves. All girls’ gang. We all applied for quick leaves from our workplace. Someone’s long back expired grandma died again, other’s, someone was not well, one’s maid went on leave…..we covered almost all the reasons to take the time off. Now, where to go, how to go?

We decided to spend three days amidst the nature. Raaji mentioned about a beautiful tea garden in the interior of Assam. She heard from someone that there was an awesome Dakbungalow, which was constructed during the British raaj. We all agreed to explore the place, though we did not have ample amount of information.

Shruti had bought a Mahindra Thar, few months back. We decided to drive all the way.

Next day, around 5 am, we started our journey. The road was awesome. We entered the tea garden at around 2 pm. Both the sides of the narrow lane were covered by endless tea plants. Huge trees in between the tea bushes not only were shadowing the plants, but increasing the scenic beauty.  We felt that we had chosen the best place.

We could see one old cattle shepherd on our way. He was taking rest under a banyan tree. We thought of confirming the direction towards our destination, so, I got down from the car and went near to him and asked him if he knew about the Dak bungalow. My enquiry made him almost jump from his relaxing position, his wrinkles became clearer with his wondering expression, observed all of us with a question mark and pointed out indicating that we were in the right track, without saying anything.

We were extremely excited to see the Dakbungalow from far. There was a huge bamboo gate to enter the campus. It was two stories Assam-type house with almost 6000 sq ft. Huge lawn in front and back. Few pine trees were standing tall in the lawn. There was a big pond in the backyard. Two broken boats were lying in the bank. The whole area was engulfed by a dense forest. We could not see any village, or shop in at least 3 or 4 km radius. 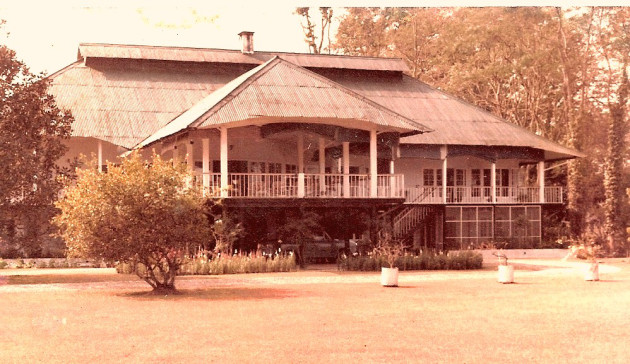 Two guards opened the door for us. They were quite inquisitive to see all five girls standing there and requesting them to allow to stay there for three days. They said that they didn’t have any problem if we take their manager’s permission, who used to live in a bungalow, 3 km away from there. Three of us along with one of the guards went to the manager’s house. He was fine if we would stay there at our own risk and he would not charge anything apart from the food. We thanked him for all these and proceeded.

The guards showed us the rooms and all the facilities. The rooms were huge and all furniture were antique. They took out clean bedcovers and pillows. We came to know that government used to pay salary to these two guards to maintain the bungalow. We took two rooms, adjacent to each other. Rashmi was not so comfortable as she used to read so many horror stories. The chowkidars told us that they would provide us dinner by 7 pm and there will be no service after 9 pm.

We freshened ourselves by taking bath in a bamboo-covered bathroom on the bank of the pond, and after that, revitalized with tea prepared by the guards’ wives. We walked on the lawn with bare foot, planned for the next morning to go inside the nearby forest and collect fruits. The chirping of the birds during the dusk made a mesmerizing ambience. The aroma and smoke coming out from the guards’ cottages were adding to the enthrallment.

We had our dinner at 7:30 pm. After the dinner, we walked in the lawn again. The deem lights in the verandah of the bungalow were making the environment quite romantic.

Suddenly, we saw the guards coming towards us with two bucket-like containers. We wondered what were they. They strictly asked us to go inside the house after 9 pm and not come out at all. The containers were for doing pee at night, as there was no toilet inside the bungalow. And if there would be number II urgency, we would have to light the lamp, which they trained us, and suggested all of us to go together.

Whatever!!! We gossiped till 11 pm in one room. And then, as all were tired, we went to sleep in our respective room. In our room, Rashmi and Shruti slept in one bed, and I slept in the other bed.

My bed was near to the big low-window. I kept peeping through the window, the clean sky with stars, pine trees... Such a beautiful ambience outside. Silence and peace everywhere. I could see some glow worms flying in the nearby jungle. It was quite nostalgic.

Didn’t know when I fell asleep…

Suddenly, middle of the night, I heard some odd sounds just outside the window…..I opened my eyes….As if two people were whispering, as if doing some conspiracy. I didn’t get up from my bed, but got alerted and tried to grab what they were talking. As the room was quite big, there was a gap of almost 5/ 6 metres between the beds, so I didn’t try to wake my friends up. Suddenly, I saw two well-dressed persons walking across my window several times. They were discussing something very seriously. I could see them almost clearly in the moonlit night. One was wearing white kurta and another one was in shirt of some dark shade. I did not have the courage to get up from the bed and go near to the window to see them properly. Looking at their gestures and the way they were walking, I was sure that those were not ghost.

But, I suddenly realized that we were in the first floor. The lawn was one floor down. And they were walking on the window’s level.

My heart got a kick. I wanted to shout loud, but my voice was not coming out…..I covered myself tightly under the blanket. Still, I could hear the sound….they kept walking till the wee hours.

To be continued……..
Posted by Madhumita Phukan at 12:28 PM No comments: