Family Togetherness is more important than Get Together sometimes

It was just the dawn. The colony was looking damn bright and beautiful. The colorful zig zag lights in each house, the warm light falling on the straight rows of the trees, and the chirping sound of the birds, all were making an embellished atmosphere all around.

Leena already put all the gift packets ready for the evening. She kept all the dresses ready too. Leena would wear a Red Banarasi Saree with golden sleeveless blouse, Sumit would wear a light green silk Kurta with jeans and they bought a cute Red kurta with white pyjama for their one and only son Piklu.

Piklu was extremely excited with his crackers, which his dad bought for him in the morning. The previous day, they went to their close friend Anu’s house to play cards. It was a real fun. As Diwali has its emphasis on money, gambling is considered lucky game. A popular saying states that one who does not gamble on this very day will reborn as a donkey in the next birth. So, Leena did not want to take a chance to reborn as a donkey.

It was their first Diwali in this house. Not house, it’s their home. Their own home, which they bought through Housing.com. It was just three months, they had moved to their apartment. So, the couple wanted to brighten up every corner. Leena painted a beautiful rangoli, decorated the entrance with flowers and colourful lights. Few lights they hanged in the balconies too. The trio was spending best time with each other since morning doing all these decoration, complementing each other. 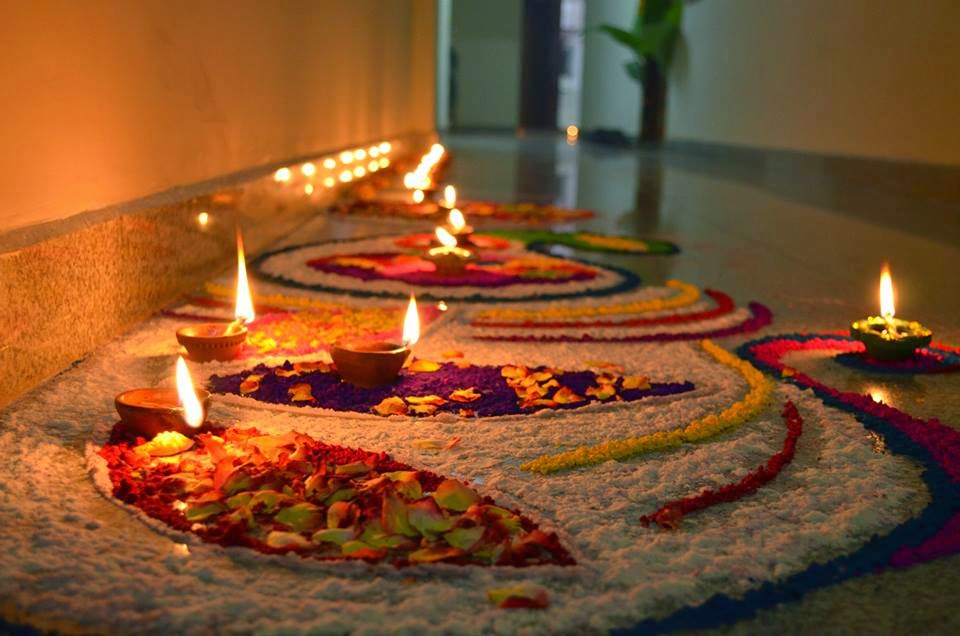 Sumit was all set with his camera too. Photography was his hobby.

Beep! Beep! Sumit’s mobile buzzed suddenly. Somebody was wishing Happy Diwali from other side probably, as she could hear him saying “Thank you. Thank you.”

Keeping the phone, Sumit said that he needed to go to meet some of his school mates urgently. He would be back in one hour. He asked both of them to be ready by then and planned to go to the open area to do the fireworks and also start sharing sweets and gifts.

Though Piklu did not like his dad going out in this hour, he did not stop as he was a big boy now. 6 years old boy. Both Mom and Beta dressed up well,  lit the diyas and candles. The aroma of the diyas and the scented candles was giving a divine touch to all the rooms and surroundings.

One hour was over. Colony’s crowd started their fireworks. Gradually, the night sky came alive with the glitter of firecrackers. Leena and Piklu kept watching the spectacular and bedazzling Diwali scenario.

Leena picked up her phone and dialed Sumit’s number. But he did not pick up.

Piklu’s friends were calling from the ground floor, he became restless. At last, Leena took the lock and key, picked few gifts and sweets, and went downstairs thinking that Sumit would surely call her up once he reached home.  She did not actually want to lock the house as mythology says, one should not close the door on Diwali evening as Luxmi mata visits every house.

Time was passing. Leena kept calling Sumit in between. He did not pick up the call.

11 PM. Leena and Piklu came up. She had to give artificial smile to all of his neighbors, had to answer to all where was Sumit. She was a bit tensed now. He never did like this. Almost everytime, he kept the promise….Sumit even did not tell her the names, to whom he had gone to meet.

12 PM. Piklu slept. He was a bit tired. Leena was really tensed now. She could not think of calling up her parents nor parents in law, as they would be nervous.

She thought whether she should approach Police. But she did not have any faith in Indian police. She did not know many people in the society too.

She kept calling….Now it was switch off. Till now, she called up at least 100 times.

What to do now. She was really confused…but at last thought she would wait till morning.

She just sat on the bed, beside Piklu, kept her eyes and ears alert, kept peeping through the window as the entrance gate was somewhat visible from her bed room …….thousands of thoughts kept disturbing  her mind.

At around 4 PM. She could see two cars stopping near the entry gate. Two guys came down from the car and talked to the guards. Leena had an intuition, her heart started aching, could smell some unexpected bad news…..The cars entered the colony. She was expecting to hear the calling bell in few minutes, though she was not sure about anything.

There were four men standing there…….She was all set to hear a bed news from them……Her eyes filled with water in fraction of a second……………..

“We are Sorry Bhabi….Sumit is completely drunk ……It’s not his fault……”One man said.

“Actually, we are his school mates, we had a surprise card and drink party. Some of us pressurised him to drink. He became uncontrollable initially as he is a non-drinker” Another added……

Leena had no word to say anything….….He could see Sumit coming front from their back with a guilty gesture.

“I am sorry Leenu………I will never ever do like this again…..I did not know how I got badly immersed in playing cards….and kept drinking….” Sumit tried to convince Leena….though his words were still a bit un-clear.

“I will never leave you guys alone in this way…….I am sorry Leenu…” He started weeping like a baby.

Saying bye to his friends……Sumit directly went to the bed room…..looking for Piklu…..He kissed him on his forehead, saying… “I am sorry Beta….I promise, I will not leave you and your mom in this kind of situation. I understand what I missed today....”, he pulled Leena too, being extremely emotional.

Leena thanked God for taking him back safe and his realization.

Posted by Madhumita Phukan at 6:39 AM